Sell With a Story: Moonstones

This past year we presented birthstone stories. For 2016, we’re taking a different angle: gemstones that sell well in each particular month. Moonstone is January’s star, a gemstone whose otherworldly beauty is loved around the world. The name “moonstone” comes from Greek but the idea has been ever present since it was discovered thousands of years ago in southern India. Moonstone holds a mysterious secret revealed in its unique glow. Hindu mythology depicted moonstone as moonbeams caught in solid form. Could there be a more romantic story about the birth of a gemstone? And this myth is a very accurate description of moonstone’s ethereal play of light millennia before we understood what causes it.

How the ordinary became extraordinary

Moonstone belongs to the feldspar group, the most common mineral making up 60% of the
earth’s rocky crust. Here’s moonstone’s secret. During formation, two types of feldspar with different refractive indexes, orthoclase and albite, were microscopically layered. When light hits moonstone, it scatters back and forth between these layers, moving ever deeper into the stone. It emerges as a soft mesmerizing glow called a sheen or schiller. The sheen can be white or deep flame blue. Either way it’s gorgeous 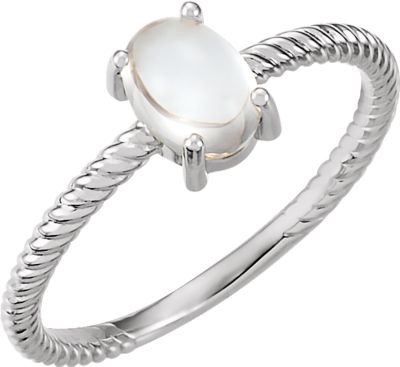 The actual process that creates the sheen — light scattering — is called adularescence. Many customers are familiar with opalescence and some with asterism, but mention adularescence and you’re sure to impress most of them.

Moonstone color ranges from colorless to white, grey, brown, yellow, orange, green or peach. In 1997, a bright green moonstone named “Parrot Green” in the trade, was found in Southern India. Generally transparent moonstone with a blue sheen is the most valuable and Sri Lanka is the source of the best. These stones are already rare and will grow more rare over time. Rainbow moonstone is one of the most popular moonstones except for one small detail: it isn’t actually moonstone. Let’s call it an honorary moonstone. It’s a heavily included colorless or near colorless labradorite. Like moonstone, labradorite is a feldspar with adularescence. When light hits rainbow moonstone, refraction from the inclusions creates a multicolored or blue sheen. This is one case where inclusions are a definite plus. Without them, the beautiful colors disappear.

Through the ages moonstone has been associated many female goddesses so it’s not surprising that many of its powers and gifts are feminine: romance, intuition, emotions, dreams and love. Most importantly, it inspires true love and symbolizes good fortune for lovers — a talisman for their happiness.

In India, moonstone is known as a “Dream Stone” that brings the owner sweet, beautiful dreams. The early Romans associated it with sensitivity and love and in the ancient Arab kingdoms, it was believed to bring fertility.

During the Middle Ages, moonstone was attributed specific healing powers — not necessarily femthat endure to this day. Headaches and backaches are its specialty and for maximum effect place it in direct contact with the sore spot. Will it work? We’d have to try to find out.

Moonstone and your future

Did you know moonstone can help you see into the future? There’s only one condition: you have to hold it in your mouth during a full moon. But we don’t know how long it has to stay in your mouth. If you want to be sure, you probably have to keep it in your mouth the whole night and hope for the best. Anyone want to try?

Moonstone is mostly cut in cabochons, usually oval to maintain carat weight, but round too. The precise arc and position of the zenith affect the quality of the sheen. Beware of flat top cabochons. They impede the sheen and lower the value. Moonstone is also cut as a tapered sugarloaf on a square base, another cut that does justice to the sheen, but once again, angle is everything. We sell moonstone and rainbow moonstone in cabochon and tapered sugarloaf. Count on our gemstone experts for high quality cuts. Set them in one of our 3C mountings for a customized look your customer will love.

birthstone, january, moonstone, sell it with a story, stuller